You are here: Home / News / Our Outdoors: A Time Out of Place 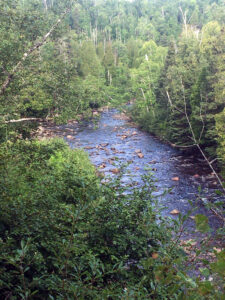 Even in the dim start of the day which hinted back to how many seasons in the area had begun, with low clouds hanging over the rock-and-cedar covered edges of the small stream on Lake Superior’s north shore, it was evidently summer.  The humidity stuck to everything like the rust-colored algae on the rocks in the slower edge pools and I felt the breathability of my waders fade as they quickly began to cling to my legs in the August air.  While not hot to start, it was a far cry from those cold spring days of the past plying the rushing waters of the flow for the massive blue-silver steelhead which made their spawning run up against the rapids from their adult home in Gitche Gumee. Where then my knuckles would turn red, then white, then useless with stiffness from the chill and require a good five-minute warmup during a hike along the shoreline, now only my brow, dripping with sweat in the warming post-dawn was likely the only red portion of my body.
In the still of the early morning, though, it was the place to be.  Shorebirds flitted and popped along the lush foliage at the edge of the rocks, and the cedars that were the only springtime green in memory were now crowded by the variety of deciduous trees, such as aspen and alder, at the beginning of the late summer day and the middle of the warm weather season.  As I slipped into position through their curtain, the leafed branches would grab at the tips of the two fly rods trailing behind me like tilted CB antennas, requiring a quick pause and flick to loosen them from the green grasp before heading down to the water.  With the prospecting power of a size 12 zebra-ribbed pheasant tail nymph, I readied my rod for the search for whatever remained in the riffles and pools, knowing that it would likely be little more than the small rainbow trout that remained in the skinny water, slowly growing big enough to enter and survive in the inland sea a mile below.
It’s often amazing how it takes so little time to adjust to moving water, even in the powerful rush of spring.  The gurgle and tumble of the stream over the black, maroon and gray rocks becomes background noise, like breathing.  Once in the river, the disruptions are what become noticeable and the slightest splash quickly draws one’s attention to a seam line running just behind an underwater obstruction.  Picking up on a particular disturbance in the first pool, I unfolded a few casts ahead of it and traced the bouncing nymph’s trajectory down the edge, hoping to connect with the rising fish.  Noting it for my return, and the possibility of some follow-up after the sun had risen, I moved on up the river.
From behind the wall of rocks that transitioned the flow from the stair-stepping downward slant into a calm pool that bent along a sharp basalt cliff, I steadied myself low against the largest boulder in the aquatic fence and unfurled a cast into the seam and watched the fly straighten out in the foam line.  With a twitch, I lifted on the rod, knowing that I’d need little more than the snap of the wrist to set the small hook into the summer resident.  As anticipated, a juvenile rainbow trout of about seven inches came easily to hand, the large gray ovals on its side were beginning to fade and the pink stripe deepening as it transitioned into its adult stage, the colors magnified by the clear water as I watched it slide away into the ripples at my feet before shooting down over the tiny rapids and back into the pool. 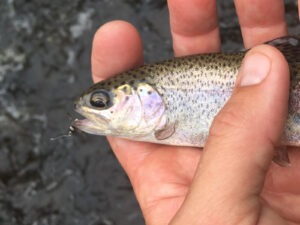 Alone for the first few hours of the day, I had my pick of the places to fish on the way up to the barrier falls.  Even after mid-morning, my only other company besides the birds was the occasional hiker on the trail above the valley, easily seen in a white or blue shirt amidst the green as the sun reached its ten o’clock position in the sky and the foggy blank burned away in the warming light while I continued my trip.  In those efforts, a few more small stream trout came to hand, and I thought of their potential to one day become the powerful chrome missiles which shot up over the rock walls and steep climbs to the far end of my hike in the cold days of April. Four or five years from now, maybe they’d be on the move on a post-winter morning far unlike the one wrapping up as the temperature rose and the brightness slowed the action on the water.  Seated on a rock outcropping, staring at the black, cubic edges of the boundary falls, where the rust-stained whitewater tumbled and splashed at about half the power of my spring recollections, I let out a sigh and instinctively blew into my cupped right hand, as if to warm it. With a smile and a sigh, I stood up began the trek back downstream, content with my time out of place on the summer version of a spring stream…in our outdoors.