The first morning of muzzleloader season arrived clear, cold, and calm.  With just the faintest bit of dawn edging over the eastern hills, I ventured down to the southernmost stretch of a favorite piece of public access land and followed the flags along the hillside break to the final mark on my GPS. The grass coming up from the cottonwood stand on the riverbank was well-traveled and along the way I noted sign and scat in the beam of my headlamp that suggested heavy doe traffic, perfect for the antlerless whitetail tag I had and for buoying the hopes of harvesting my first deer with my inline.  The prospects of the early morning conditions excited me as I crossed the pinch point and entered the open meadow.

I burrowed in against a small stand of buck brush on the hillside.  The position gave me shots at trails running at 20, 50 and 100 yards along the narrows formed by the half-iced river.  I tucked my hunting pack into the base of the cluster of wrist-thick trunks at my right. The bush’s angling branches provided a nice screen to break up my outline, and another stand down and to my left did the same, creating a 10-to-2 shooting lane with ample cover to conceal my nervous energy.  Along with the start of the hunting day, the slightest hint of the gusts to come rolled down from the hills to my southwest.

As I turned my face to the gentle breeze, I caught motion on the far side of the field. My heart jumped as I confirmed through my binoculars that it was indeed a doe and she was tracking directly toward my position on the middle trail.  I felt the flux of energy often reserved only for an antlered deer shoot through my body and I began to tremble from head to toe as her shadowy form flowed in and out of the rising and falling grasses, moving like an apparition as the white of her flicking tail appeared from time to time. Lowering my optics, I braced the bottom of the muzzleloader on the steady stick and began to shake violently from the endorphins that were coursing full force through my body. I could hear the thunder of my pulse in my ears and tried in vain to slow my breathing. I kept telling myself “it’s just a doe…it’s just a doe…” to no avail as the distance between us narrowed and she cleared the screen of branches, approaching the open area directly in front of me.  Fully broadside, I pulled the hammer back on the inline and readied for the shot.  The green front bead and red back dots on my open sights swirled in and out of focus as they lined up and I inhaled as she walked behind them. BOOM!

The smoke of a muzzleloader is the most memorable part of the shot, in fact, in that moment it seemed as if four times the smoke was generated than in the bench session on the range leading up to the season.  The delay was excruciating as my body shook with a deep exhale.  Over my heartbeats, I could hear the doe running after the echo faded from the valley.  As the smokescreen cleared, I scanned the field with my shaking binoculars, but found no signs of the deer.  I waited a few minutes for things to calm down – including my own body – and went straight out to the trail, despite what I had heard, half expecting to find her laying near the impact site like the buck I had taken at the end of rifle season. She wasn’t there. 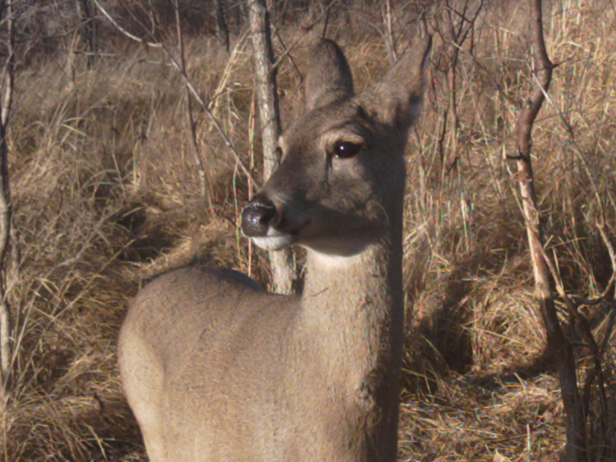 In the growing morning light I started the nautilus pattern, spiraling out from the area on the trail which I reckoned with my position on the hillside, again and again returning to the middle, guessing from what I figured was the point of impact in the grass that I had shot just under the deer; the steadiness of my monopod overridden by the shaking of my entire body.  There was no blood or any other sign of a hit, save for that of the doe’s feet against the ground and the hard hoof prints kicking up dirt and grass at the base of the trail when she fled.  Going 200 yards in both directions beyond the natural funnel and inspecting the banks of the river for over an hour, I found nothing and presumed a clean miss brought on by the excitement of my first opportunity to convert with my muzzleloader.

I thought back to the three neon holes in a tight group on the black target to check my aim leading up to the season. They seemed to come so easy in the controlled situation.  I tried to replay the far-off appearance of the deer and my panicked placement of the primitive weapon on my brace as she approached. It was all a blur.  I saw the shaking green and red dots and her dark body behind them followed by the choking gray smoke, and like any good – but missed – opportunity in the outdoors, I had to laugh in order to start compartmentalizing it.  With a forced, frustrated chuckle, I packed up and headed out.

As I returned home and unloaded my gear, I grew curious about the rush which had simply owned me in the field and I checked my watch which I use to monitor my heart rate and record my workouts during the week.  There, in the moment of truth etched on my electronic record, was the evidence that doe fever indeed does exist: a spiked heart rate of 152 beats per minute. By comparison, I’m usually only at or above that level when I’m running.  It was proof positive that even antlerless deer can bring just as much of a rush as a buck, and its effects can override the steadiest stick and most secure positioning, leaving nothing but a befuddled laugh with the consolation prize of an opportunity to try it all again somewhere down the trail…in our outdoors.