Our Outdoors: The Scent of Faith
By Nick Simonson

I often wonder what it’s like, to smell a million times more than what is humanly possible.  When my lab lifts his nose to the northwest gusts and cocks his head ever so slightly before upping his pace into the breezes, I try to box the experience into something my limited senses can comprehend.  Sometimes I think it’s as if he picks up the scent of a covey of grouse or a running rooster many yards up as some strange undercurrent in the flow of the wind, the way I detect the smell of barbecue going on someone’s smoker a few houses up the block.  Other times I imagine that there’s some little curling trail that he hones in on, a hot red set against the green of harvest chafe or slough stink blowing in the wind, like the Predator from the eponymous movies, his brain processing it as a warm spot amidst the cooler autumn air and the myriad other odors it carries.
Whatever it is like, it usually ends in a frantic switchbacking in an effort to isolate the source of the scent, and I can only watch the ends of the process and wonder at the means that lead us up into the grassy hills, deep into the cattails or winding around in the brush until a covey rises or a rooster flushes in a boisterous explosion of wings, dried vegetation and gunpowder.  Relying solely on the cues from my dog which that scent generates – an uptick in speed, the spinning tail wag, and sometimes a hard-set point staring into the grass ahead – I take the idea that a bird is there as a matter of faith, knowing that this companion, as his predecessor before him, understands what we’re after, regardless of how it enters his nose and appears to him in his brain.
While I can’t anthropomorphically make the leap between what my dog is experiencing and how it must feel, the pursuit is one based on trust.  Even in those chases where the trail ends with where the birds once were and may have just recently fled, the confidence in what he is experiencing and what I am seeing reaffirms the process.  Sometimes, my dog’s doubling back on the hot zone produces a surprise flush of a pheasant that held tight, curled out of the way, or was just running in circles to confuse us.  Whether the chase ends with a bang and an exciting flush, or just the idea that birds were there recently doesn’t really matter. It serves as an affirmation. 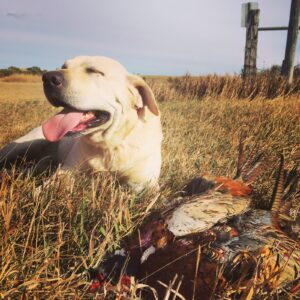 Just like science has a theory of what walleyes can see in the dimmest light of sunset, or what level of sound sets a whitetail doe’s ears on edge, there’s probably some way to at least partially quantify what a dog can pick up with its nose.  We rely on color studies conducted in some fisheries lab as to the power of sight held in the unique eyeballs of the northland’s favorite fish.  Through trial-and-error of slight shifts and calming breaths, we hope we can prevent alarming a passing deer, but note that there’s a low volume threshold that sparks a raised tail and startled sprint out of the immediate area.  The same holds true with what scent spurs an increased pace and the other cues that suggest a dog is hot on the trail of his quarry.  However, until we can enter the brains and the senses of those animals and those of our domesticated field partners, there’s a lot of it we have to guess at.
Until those theories can be confirmed, I’m content to make the leap behind my dog as he presses on into the wind or curls his way along the trails of scattering upland birds in the grass. Taking in the process so that while I may not understand exactly how he’s doing it, I know exactly when he is and when his nose leads us closer to the moment of truth.  I just hope he doesn’t place as much faith in my shot when a rooster rumbles forth and the flush, despite all the suggestions leading up to it, still surprises me…in our outdoors.